We need an ecosystem approach, which can help to:

To apply an ecosystem approach, we must first identify the benefits and where they come from. Then we must understand how different planning or resource-use choices will affect these ecosystem services. Involving people in decision-making and in getting things done is vital. 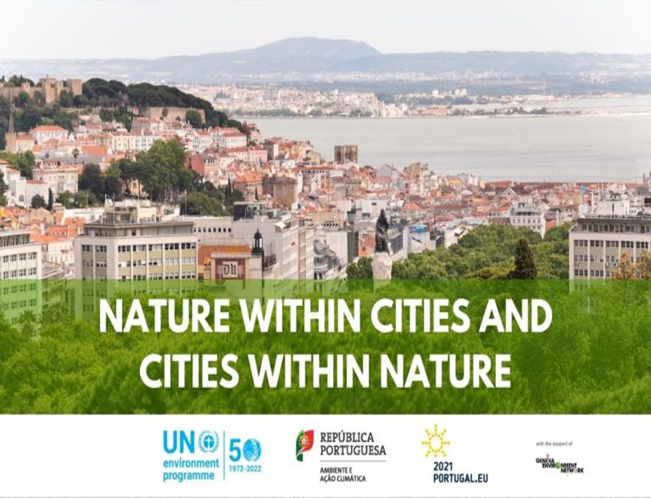 This high-level event, co-organized by the United Nations Environment Programme and the Portuguese Presidency of   the Council of the European Union (EU), with the support of   the Geneva Environment Network, focused on exploring the multiple benefits of Nature-based Solutions (NbS) for cities, highlighting opportunities and challenges to advance and scale up NbS, from local action to global solutions, accelerating impact in 2021 and beyond. 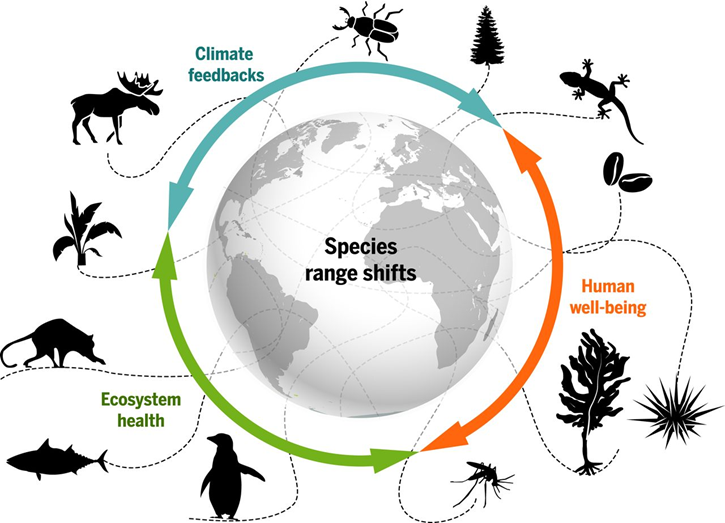 As the global climate changes, human well-being, ecosystem function, and even climate itself are increasingly affected by the shifting geography of life.

Climate-driven changes in species distributions, or range shifts, affect human well-being both directly (for example, through emerging diseases and changes in food supply) and indirectly (by degrading ecosystem health). Some range shifts even create feedbacks (positive or negative) on the climate system, altering the pace of climate change.

The key factors affecting biodiversity on green roofs are identified with an assessment system with following proposed six major factors: 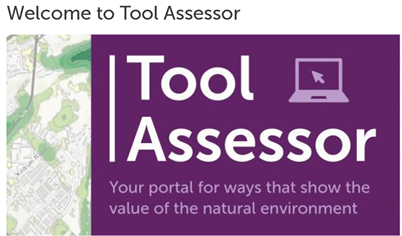 The design features, different substrates and planting regimes are considered in the proposed system

Substrate or growing media is crucial for green roof plants. Green roof systems with a variety of substrate depths and vegetation types tend to have higher spider, beetle, and bird diversity.

The use of natural, local soils and substrate can assist biodiversity, as well as benefit regional and endangered species because local species have already adapted to that particular soil environment. The substrate depth is often a good indicator of future successes in biodiversity for green roofs. Other factors such as pH value and organic constituents for substrate will affect the growth of green roof plants and thus the colonization of various vertebrates and invertebrates. 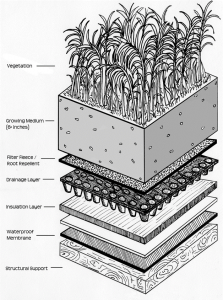 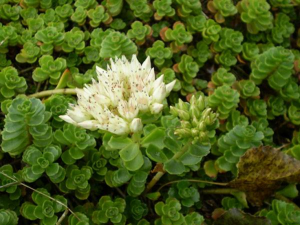 Sedum spurium. This is another perfect groundcover, an herbaceous and deciduous plant with beautiful colors depending on the cultivar. It can grow in any soil type and can tolerate a few hours of shadow a day. It is 10 to 15 cm tall, with bright green leaves that turn red when the cold season arrives. It blooms in summer with red, pink, or white flowers.

It is believed that proximity of green roofs to the nearby naturalized zones or landscape can contribute a positive influence on biodiversity. Good habitat connectivity can overcome the adverse effects (species extinction) brought by the habitat fragmentation and modification during the urban development.

The aim is to engage green roofs and create green corridors which allow a continuum among ecosystems around the city and the itself. This connection among spaces and species would allow green roof practitioners in the city the interchange of information about evolution of populations, sharing seeds and knowledges gained daily, etc. The support of local public governments with specific local planning, help of public servants, rules for ensuring biodiversity and tax reduction for green roofs owners is also welcome 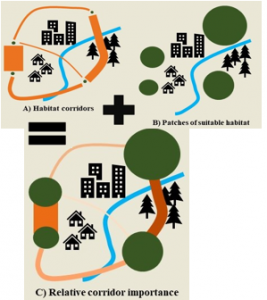 A simple system is proposed for the biodiversity self assessment of green roofs. The system consists of 6 major factors as shown in Table in following page and the respective criteria for the score are described. The overall scoring is the sum of the credit marks and a proposed rating is given in each concept. This assessment system is useful to building designers and developers who would like to evaluate biodiversity in green roof projects. 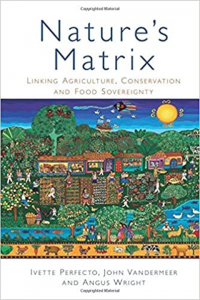 Other Matrix: the subject of Nature’s Matrix is conservation of biodiversity, but it differs from other books by proposing a radically new approach based on recent advances in the science of ecology plus certain political realities.

The analysis in Nature’s Matrix is based on the linking of three key political :  crisis of biodiversity loss, food and agriculture and political unrest in rural areas 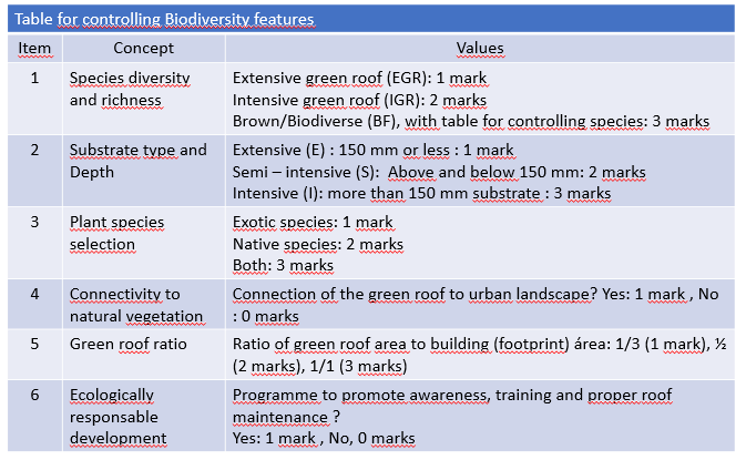 Successful development  of bird populations is increasingly constrained in the urban environment. Taking into account that green roofs provide additional habitats of interest to enhance bird population and it improves biodiversity in the cities. Therefore, the aim of this module is to supply indications about ideas to attract  birds and identify conditions to be taken into account.

As it has been stated by researchers, most birdlife management is habitat management. Thus, any management objective of increasing the carrying capacity of the green roofs  for birds can be met largely by maintaining proper habitat conditions. It is a challenge to populate  green roofs  not  only with plants but also with insects, birds and other animals.

There are basic components  of habitat which are food, cover, water and space to attract the presence and carrying capacity of birds in the green roofs.

Birds as biodiversity indicators are considered by the Biodiversity Indicators Partnership (BIP). BIP brings together a host of international organizations working on indicator development, to provide the best available information on biodiversity trends to the global community. The Partnership was initially established to help monitor progress towards the Convention on Biological Diversity (CBD) 2010 Biodiversity target. However, since its establishment in 2006 the BIP has developed a strong identity not only within the CBD but with other Multilateral Environmental Agreements (MEAs), national and regional governments and other sectors. As a result, the Partnership will continue through international collaboration and cooperation to provide biodiversity indicator information and trends into the future

Availability of food is the most important component of habitat. Green roofs are one of the most important ways to restore habitat for invertebrates and are usually colonized by numerous insects including spiders, beetles, ants, bugs, flies and bees. It turns these sites attract predators like birds, bats, mammals and reptiles. In this way it contributes to increase the availability of food for birds. 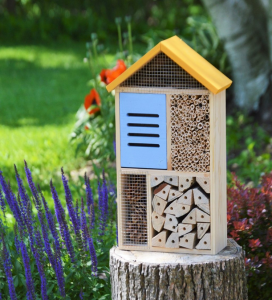 Keeping the dead stems of plants to one side, can give many insects and bugs a great place to shelter. The hollow stems of herbaceous plants and shrubs are particularly useful for hibernating minibeasts and larvae.  Piles of dead wood, logs, leaf litter and dead vegetation are very popular with hibernating and breeding insects, beetles, wood lice and ladybirds in particular.

Cover is any variation in the habitat that provides protection from weather or predators or that offers a better vantage point. A common use of cover of particular importance for birds is escape from predators. Nesting and roosting cover can also be critical for many species of birds to establish on green roofs. In this sense, some researches suggest that urbanization can decrease nest predation something that made gardens and therefore, green roofs, suitable habitat for birds.

Clearly, a habitat function of green roofs is the provision of nesting sites for nesting birds. Cover may also furnish important protection against severe weather, providing shade from the heat, relief from wind and precipitation or protection against radiant heat loss to a cold night sky. Many bird species use certain types for resting during periods of inactivity, something that has been described as loafing cover. 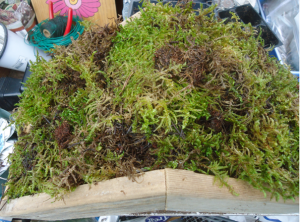 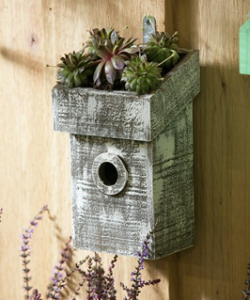 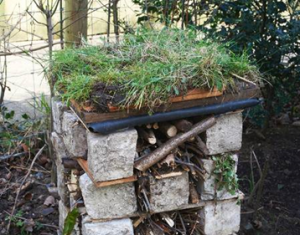 Most bird species replenish body water by drinking surface water. This accessible water is only available on green roofs especially in these intensive when are built with ponds, fountains and similar structures. Depending on the weather conditions of the area and green roof features, if nature does not provide enough rainfall to support the green roof plants then it is necessary to provide water through supplemental irrigation. This remaining water from the irrigation system on the green roof is another important source for birds. When surface water is not available, some birds can sustain themselves by ingesting the water contained in succulent plants that are usually used  in green roofs, e.g. sedum eaten by finches. If an increase in bird population on green roofs is desired, waterers can also be installed as carried out in many conventional gardens. 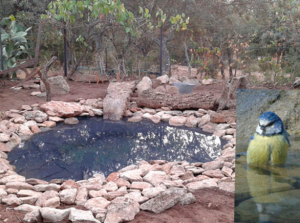 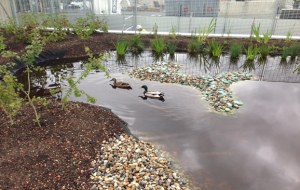 Individual  birds require varying amounts of space in which to find adequate water, food, cover and to locate mates. Populations of birds require even more space  and the question naturally arises as to how much space is enough  on green roofs to maintain viable and permanent populations and communities of birds. In each case, the amount of space or suitable habitat depends upon the size of the population. This population size depends in turn, upon the size of the species, its diet and the productivity and diversity of the green roof  habitat  in relation to the  habitat requirements of the species. Clearly, many cases there are in which green roofs of a sufficient large size provide habitat for birds. 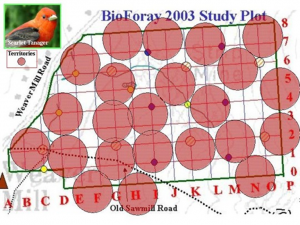 In winter and part of autumn many birds, majority of Passeriformes, turn to  have a gregarious behaviour and share territories in green roofs habitats.

Previous Topic
Back to Lesson
Next Topic
We use cookies on our website to give you the most relevant experience by remembering your preferences and repeat visits. By clicking “Accept All”, you consent to the use of ALL the cookies. However, you may visit "Cookie Settings" to provide a controlled consent.
Cookie SettingsAccept All
Manage consent

This website uses cookies to improve your experience while you navigate through the website. Out of these, the cookies that are categorized as necessary are stored on your browser as they are essential for the working of basic functionalities of the website. We also use third-party cookies that help us analyze and understand how you use this website. These cookies will be stored in your browser only with your consent. You also have the option to opt-out of these cookies. But opting out of some of these cookies may affect your browsing experience.
Necessary Always Enabled
Necessary cookies are absolutely essential for the website to function properly. These cookies ensure basic functionalities and security features of the website, anonymously.
Functional
Functional cookies help to perform certain functionalities like sharing the content of the website on social media platforms, collect feedbacks, and other third-party features.
Performance
Performance cookies are used to understand and analyze the key performance indexes of the website which helps in delivering a better user experience for the visitors.
Analytics
Analytical cookies are used to understand how visitors interact with the website. These cookies help provide information on metrics the number of visitors, bounce rate, traffic source, etc.
Advertisement
Advertisement cookies are used to provide visitors with relevant ads and marketing campaigns. These cookies track visitors across websites and collect information to provide customized ads.
Others
Other uncategorized cookies are those that are being analyzed and have not been classified into a category as yet.
SAVE & ACCEPT